Father was a no show at the 8 a.m. Holy Mass today.  The old man stood at the back door waiting for him, he said he had talked to Father and that he had said he would be there.  At 8:02, we decided to have a communion service.  Jim, wonderful servant of God, did the service for us.  One of the men came up to me and a woman that I was speaking to after the service.  You never saw this man without his rosary in his hand.  It gave me such hope to see one so faithful every day to the Rosary of our Blessed Mother.  He came over and speaking to the woman spewed a derogatory comment about Father.  My heart dropped.  The woman agreed and joined in the bashing.  This isn't the first I had heard of this, and every time I hear it, it broke my heart.

They invited me to McDonald's for breakfast, I declined and said I would stay and pray.  The woman said to me, "Well he needs it!" (Meaning Father.)  What she didn't know was that most of my prayers would be in supplication for THEM, and not Father. 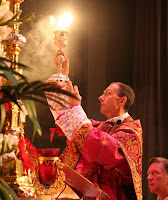 Do you know what a Priest is? What he does?  Yes he is still a human being, but one set apart by God.  By his obedience and anointed hands he has agreed to give his whole life to bring us heaven upon the earth.   Think about that, a man gives his whole life so that you can have something that you could not have without him.  If you truly understood this, you would seek to serve your priest instead of him serving you.

Without a Catholic Priest there is no baptism, and our children and family remain in their sin. 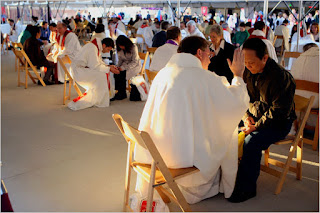 Without a Catholic Priest there is no absolution of our sins.
Do you know how powerful the Confessional is or how it saves you from hell?  Do you know from the hands of a Priest in giving one absolution is more powerful than 500 years of sacrifices on the altars of the Jewish people?
Without a Catholic Priest there is no Confirmation, no gifts of the Holy Spirit.
No wisdom, piety, fortitude, knowledge, prudence, understanding and no fear of the Lord.  Think about that, no fear of the Lord.  Those who don't fear the Lord take a fast track to the devil, and if fear of God was lost upon the earth, what a horrible evil place this world would be.

Without a Catholic Priest there is no special union in Marriage in the Catholic faith, the marital union with the Holy Eucharist which brings not just two souls together, but two souls as one united to God.  For when a couple marry in the Catholic Church with the Holy Mass and take the most Blessed Sacrament, they are not only marrying each other, but their union unites them with God in the holy Eucharist. 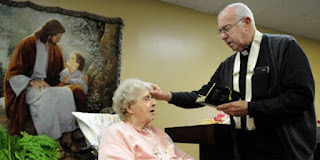 Without a Catholic Priest there is no Anointing of the Sick, which also cleanses sins.  How many souls have made it to purgatory only by the grace of having received this sacrament before death!  And how many fell into hell for the lack of it and dying in their sins.

Without a Catholic Priest there is no Priesthood, for only a Bishop (who was first a Priest) can give us Priests and Deacons through the Sacrament of Holy Orders. 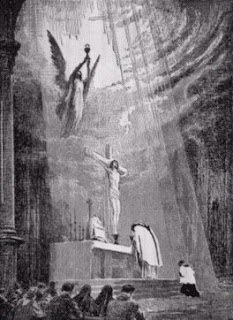 Without a Catholic Priest....and I shudder to think of it... there is no Holy Mass.  The Holy Mass is the marriage of Heaven and Earth.  In our earthly flesh we cannot even conceive how fortunate we are to be present and join in the prayers to God at the Holy Mass.  We should thank God daily for the Holy Mass, for I tell you the truth, without the Holy Mass and the clean oblation offered to God at each Holy Mass, the world would cease to exist.

And without a Catholic Priest there is no Holy Eucharist, no Jesus truly, and substantially present, body, blood, soul and divinity in the most Blessed Sacrament.  This is the one reason why the Catholic Church will always exist until the end of time, because our Lord said, "I am always with you, until the end of the age."  Because He said it would be so, and He would not leave us.

You don't speak ill of A-N-Y priest, either in your thoughts, and especially not out of your mouth.   Because if you say the slightest word against one of God's priests, you are slapping our Lord in the face.  Our Lord Jesus instituted the Priesthood, and every Catholic Priest is His.

People talk about bad priests (thank goodness I have never met one!), but I tell you the truth, if you knew what a priest will have to account for when he goes before the throne of God, even if he was the worst Priest on the planet, you would lie down and beg God for him.  We are called to be holy, but a priest is not only called to be holy, but to bring souls to God and God will ask him to account for every soul that he served and whether he led that soul to God or away from Him.

If you knew the power of God that comes by the grace of the Catholic Priesthood you would whisper your priests name in fear of having the wrong inflection and offending God.

Yet with all this, God is so good, for he only lets a few of us know the truth, otherwise our Priest might fall to pride and self accomplishment when it is all God.  So God in his mercy, even though He has given us this wonderful gift of the Catholic Priesthood, He gives them the gift of humility, for even with all that He has given a Priest to do, they still have to wash their own dishes and do their own laundry.

Some of my Favorite Priests:

And these don't include my "Everyday Holy Mass before I go to work." Priests!
Love them too. 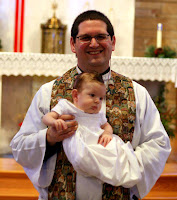 Unknown said...
This comment has been removed by a blog administrator.
7:56 PM