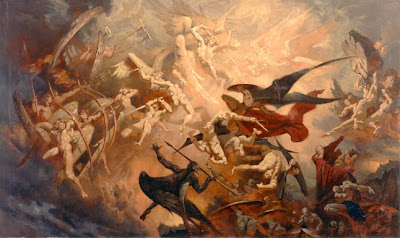 I am at war.  Although I may not look like it, trust me I am in a great war that never ceases around me.  I fight a battle everyday for the souls in purgatory and the lost souls that fall into hell everyday.  The loss of souls is one of the greatest tragedies in the universe.  Because God's justice is perfect, lost souls are in hell of their own volition.  There is nothing more heartbreaking to realize that this sentence is for all time.  Those that are falling into hell right now will still be suffering there 1 million years from now, and 100,000 x 100,000 million years and so on..

Stepping on the battlefield for lost souls  is one of the most treacherous things you can do in relation to the status of your own salvation.  The reason for this is that you can't do anything for God.  You aren't doing God any favors by your prayers, even if 1000 souls where to be released from Purgatory with your prayer, you didn't do it, God did.   You just asked that the battle be waged, God is the one that did everything.  But in the warriors walk you are at constant risk of the same pride of the demon, thinking that what you may do in prayer is 'needed' by God.  I assure you, it is not.  Your prayer and supplication is for your brethren and for your advancement in holiness while on the earth.  Even your personal holiness should not be for you.

When we seek to be holy or a saint, that is still seeking something for ourselves, but we should seek to be holy so that we can go before God and plead for others who are lost.  The motivation for this should always be out of love for God and love for others.  One of the greatest prayers that you can say is "Not for me Lord, not for me."  Nor should you seek that anyone see the war you are engaged in.  This is a silent work done alone just between you and God for others.

Even in the gifts God gives sometimes we should seek less.  Don't seek to know the result of your prayer because if you knew what God was doing, then again you are subject to pride.  It is by the lack of knowledge that we attain great faith.  Sometimes even the gifts God gives we should seek less of them.  Don't seek visions and dreams, but ask God to give you less of these, for they too can be a source of pride.  By many graces we think we are special before God and rise ourselves above others when we should be a servant to all.  Ask God only to give you enough to keep you motivated in prayer.

Engaging in the battle for souls is one of the greatest purification process you can ever partake of.   For if you pray for a lost soul with great love without seeking recompense for yourself, God will open His heart to you and He will hear your prayers.  This is when the demon's harvest of souls is greatly decimated. So much so that he will have no reason to hide from you.  Many times the evil one has tried to scare me from my work with different physical manifestations and has expressed great anger while I was engaged in prayer.

Once in Saint Michael Catholic Church I was praying in front of the Blessed Sacrament and I clearly heard hooves stomping on the beams above me.  I ran out of the church.  A few days later when I came back, again I was praying and the Lord said to me, "Where I am you are not to run."  I've been scared a couple of times since, but I didn't run, because He told me not to.
Courage in face of this hidden malice is something that can only come from God.  God is the one that gives courage, for fear is not of Him.  If we strive after this courage for the cause of the lost, God will give it to us.

Slowly as you continue to take the battlefield more and more, you realize how powerless the demon is in the face of God.   That doesn't mean he won't continue in his efforts, but you are affected less and less.  I think Saint John Vianney spoke of almost getting used to it, this is because you know that unless God allows it, the demon cannot hurt you.

The Battlefield
First He let's you know the battle before you, how dire the situation really is.  Many now are on the path of destruction.  The scope of the problem is overwhelming.  Yet as one created in the image of God we have the great gift of intervention for our brethren.

Does a soldier take the battlefield assured of 100% health at the end of the battle?  No.  Warriors know that the possibility of wounds or even death are a possibility.  But those who step on the battlefield take the risk because the victory is worth all that we must suffer to attain it.