Legions of Angels Will Defend You

The average person has one guardian angel, they can have more as needed, but most of the time, one is more than sufficient to protect the soul because of the strength of the least angel in the Kingdom of God can defend the soul against many many demons.  This is in accordance with the free will of the person being defended.

The free will of the soul fighting off the evil forces is the key to whether the Angel can be effective to provide God's protection and guidance, because if God will not take back His gift of free will to man, then the Angels certainly can not go against man's God given free will, even if that free will is to reject the Creator. 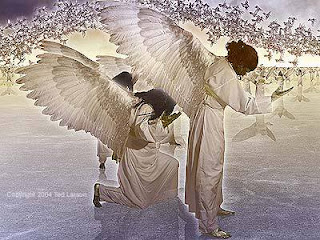 Because Warriors seek by the grace of God to take the blackest souls directly from the demon's grasp, the Warriors are high on the devil's hit list.   This is why the Warriors, can, at God's discretion, ask for a Legion's protection.  Every night before the Warrior sleeps, he or she should cross themselves with holy water, and ask God to send an angel to stand guard outside the doors and windows of the home.

With great love for God and for the souls that God loves, even the most lost soul, the Warrior takes the battlefield of the Cross and pleads at the bottom of the Cross with Jesus hanging in his suffering with the blood pouring from Him.  The Cross of Christ, as is all of His life, Passion, and Resurrection are moments that are NOT in the past, they are NOW.

The eternal God took flesh, and gave us a permanent oblation of His life, Suffering, Crucifixion, Death, and Resurrection that is not placed in the past but the eternal NOW.    When God who is eternal touched the earth by becoming the Holy God Man, even though His flesh was subject to time, He DIVINITY was NOT, and as such as He was equally Man and Equally God, then we have the God given gift of pleading EVERY MOMENT OF THE LIFE OF JESUS for the salvation of one is lost.

Jesus was our offering to God, so offer to the Father every moment of His life and plead to the Father through the Son for the salvation of the lost. 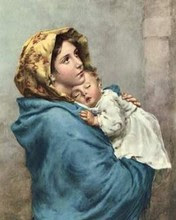 Offer to the Father the infancy of our Lord Jesus Christ for those about to be aborted, and plead for the conversion of the heart of the Mother to a heart like His Mother's. 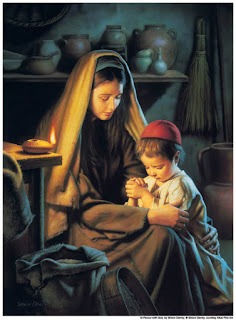 Offer to the Father the childhood of our Lord Jesus Christ for those who are physically abused as children and plead to God for the conversion of the abusers. 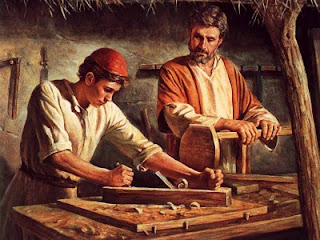 Offer to the Father the teenage years of our Lord Jesus Christ for those teenagers who face a world that does not seem to know God anymore. 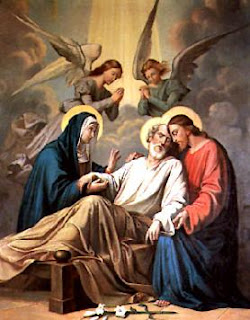 Offer to the Father the early years of our Lord Jesus Christ for those who struggle with the loss of a Parent, (He lost Joseph), for those trying to learn a trade or looking for a job, (Jesus had to work to support His Mother)

Offer to the Father the last day that Jesus was in His Mother's home, and their goodbye to each other before He would start His ministry.  Offer this to the Father for parents who have to say goodbye to children by separation, death or other means.

We must never forget that God is a very efficient God, and nothing He did on the Earth was wasted.  Every step, every breath, everything He did had a purpose geared toward our salvation.

#Reasons to Believe in Jesus


Reasons to believe Jesus is alive in a new life with God can be found in quotes from two prominent atheists and a biology textbook.
> Thus the passion of man is the reverse of that of Christ, for man loses himself as man in order that God may be born. But the idea of God is contradictory and we lose ourselves in vain. Man is a useless passion. (Jean-Paul Sartre, Being and Nothingness: A Phenomenological Essay on Ontology, New York: Washington Square Press, p. 784)

> Among the traditional candidates for comprehensive understanding of the relation of mind to the physical world, I believe the weight of evidence favors some from of neutral monism over the traditional alternatives of materialism, idealism, and dualism. (Thomas Nagel, Mind and Cosmos: Why the Materialist Neo-Darwinian Conception of Nature Is Almost Certainly False, location 69 of 1831)

> And certain properties of the human brain distinguish our species from all other animals. The human brain is, after all, the only known collection of matter that tries to understand itself. To most biologists, the brain and the mind are one and the same; understand how the brain is organized and how it works, and we’ll understand such mindful functions as abstract thought and feelings. Some philosophers are less comfortable with this mechanistic view of mind, finding Descartes’ concept of a mind-body duality more attractive. (Neil Campbell, Biology, 4th edition, p. 776 )

Sartre speaks of the "passion of man," not the passion of Christians. He is acknowledging that all religions east and west believe there is a transcendental reality and that perfect fulfillment comes from being united with this reality after we die. He then defines this passion with a reference to Christian doctrine which means he is acknowledging the historical reasons for believing in Jesus. He does not deny God exists. He is only saying the concept of God is contradictory. He then admits that since life ends in the grave, it has no meaning.

From the title of the book, you can see that Nagel understands that humans are embodied sprits and that the humans soul is spiritual. He says, however, that dualism and idealism are "traditional" alternatives to materialism. Dualism and idealism are just bright ideas from Descartes and Berkeley. The traditional alternative to materialism is monism. According to Thomas Aquinas unity is the transcendental property of being. Campbell does not even grasp the concept of monism. The only theories he grasps are dualism and materialism.

If all atheists were like Sartre, it would be an obstacle to faith. An important reason to believe in Jesus is that practically all atheists are like Nagel and Campbell, not like Sartre.