The Conversation (Part I) 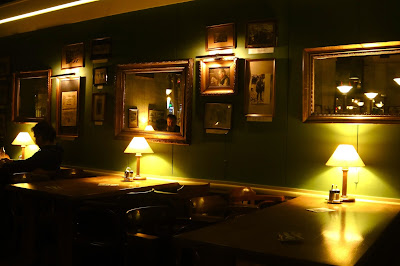 This story is told in a fictional sense, but what it reveals is true.
(The Blogger/Writer in this story is a  Male, 26, College Graduate.)

There wasn't much going on, I needed a story to write, a personal interest piece.  Not finding anything to stimulate my imagination in local events, I went out in search of a person or persons of interest that I could conjure into an interesting story so I can meet my deadline.    What I found was more than a returning soldier surprising a family member or a lost dog reunited with the little boy that was searching for him, I found something quite terrifying.

I went into a local eatery that had a bar, I wasn't hungry, I was looking for someone that would strike my interest so to speak.  As I walked in, I saw most of what you see in this restaurant on any given day.  Not a chain restaurant, but you find the 'Tumbleweed' type crowd there.  Married couples, older parents and a caregiver adult child, first dates, things like that.  Then I looked in the corner and saw a middle age woman alone, with a haunted look on her face.  She looked as if she had just found out something devastating.  Her eyes stared at nothing as if she was thinking how to tell someone something that would not be good news.   She had short brown hair, with a round face and large eyes.  I went over to her and thought I would start up a conversation, make up something, get her to talk to me, get her to tell me her story.  But as I approached her, I knew a lie wouldn't work with her, the best thing to do would be to tell the truth.

"Look, I'm sorry to bother you, but I write a blog, and I guess I am hunting for a story, a personal story that I can write about, and you look like you have a story to tell. "

"Please sit down,"  She smiled at me as if she had known me all her life and they way she looked at me was the same as my Mother who when I was trying to hide something, knew everything I had been up to.

"My name is Michael.  Do we know each other?" I asked.

"Then may I asked what the look that you were giving off before I spoke to you?  You look like you had lost your best friend and was looking for a way to tell the spouse."

There was a silence between us as she sized me up with those eyes.  My brain was screaming for me to stay silent even though I wanted to ask many questions.  She broke the silence.

"Well Michael, you want a story, but let me ask you a question.  What would you do if you found a terrifying truth that could not be denied but neither could it be proven?"

I was silent as I pondered this.

"Let me explain.  We live in a natural world with material objects, atoms, electricity, etc., correct.?"

"Now the truth that we understand is bound by the culture and environment that we live in.  There is scientific truth that can be tested, observed, repeated.    There are cultural truths that we live by, our values, morals, beliefs, etc.  Less attainable than the scientific truth, but these are still truths that men and women have been willing to sacrifice much for.  But both these truths are still contained within the framework of our environment.  Not just our neighborhood, but the entire universe.  Would you agree that there are truths that we maintain as 'true' because we believe them as a culture or we have observed a truth by a scientific method?"

"Yes...but could you give an example?"

"Sure.   This Glass, it contains water.  If I turn the glass upside down, would we both agree that there is an agreeable truth as to what the result would be?"

"Yeah...the liquid will spill on the table."

"Of course.  And we could do that experiment over and over again.  But there is also a truth in the belief that murder is wrong.  This is not testable, but this is a truth that has been held by our culture for quite some time, would you agree?"

"But still any truth that is a product of our culture, experience or science is bound by the Universe. What if I told you there was a truth that was not bound by the universe and can never be proven by science or truly understood by the mind of man."

She laughed a little, took a sip of her drink and then looked at me very seriously.  "Where do you feel truth if something is true?"

"Simple, where do you feel or know something is true within your physical nature?  In your head, your heart, your gut, all three?"

"Oh, I see, I guess sometimes a combination of all three, but sometimes it is usually one of those depending on what the truth is."

"Exactly!  But you agree that your knowledge or sense of truth is contained within yourself, because if you do not accept that murder is wrong, it is not a truth for you, wouldn't you agree with that?"

"I guess you are right, I never thought of it that way."

"You can't deny the water spilling, why would anyone reject that? It doesn't make much sense to deny the truth of gravity."

"Agreed, but you cannot deny the individuals right and ability, no matter how absurd, to reject a scientific truth."

"I guess you are right there.  What's your point."

"I didn't know myself that was what I had discovered at first, but yes, I am.  You see, I am a Mathematician, as a result I am very analytical, and I have found the truth of God, because the Eternal Truth allowed me to find it........and I found something else"