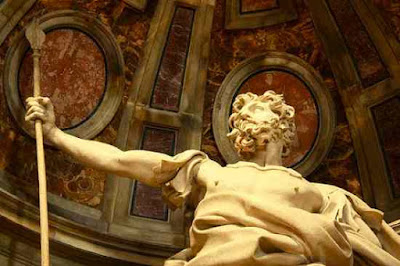 One day at OLPH I was praying the Stations of the Cross for those that kill or murder for money.  I don't remember what inspired me to do this, but I was praying and begging God to turn these people back to Him, to open their eyes to what they were doing to their soul.  For just slips of printed paper these people were destroying their very soul and were on the road to eternal damnation.

Know that my thoughts were for those in the mafia, assassins, gangs, people like that, I wasn't thinking of anyone beyond my own present time. 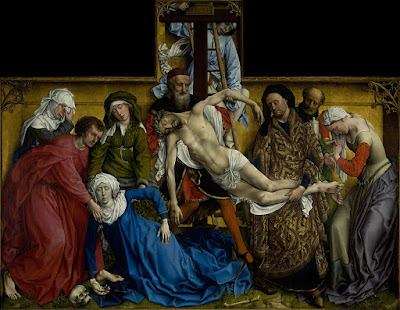 When I get to the Thirteenth Station of the Cross I always ask God to let the Divine Mercy that flowed from His side with His Holy Blood wash over those that do evil and bring them back to God.

Then something happened.  I was shown St. Longinus at the moment he pierced the side of our Lord on the Cross.  When the blood and water washed over him, his eyes where opened, not just his physical eyes, but his spiritual eyes also.   So much was revealed to him that he instantly knew the truth of who Jesus was.  This is why he exclaimed, "Indeed, this was the Son of God!"  (Mark 15:39)

What I didn't know, and was surprised about, was that what God revealed to St. Longinus was the state of his soul.  You see.....St. Longinus had been a murderer for hire.  Trust me I was as surprised as you probably are too.  He did have a vision problem that God healed on Calvary, but the greatest healing came when His soul encountered the Blood of Christ.   At that moment, he was shown every person he had killed, and how God would judge him.  St. Longinus saw the pit of hell beckoning for him and knew he was going there for all eternity for his sins unless he repented and changed his life.

St. Longinus exclamation of the true nature of Jesus wasn't done boldly, it was done with fear and trembling.  This was a man that knew he was close to going to hell for all eternity and was given one last chance to save his own soul.

Nothing else could have made St. Longinus change his course than the Blood of Christ.  He thought he was fine, he had a good deal, and would have kept doing what he was doing, never thinking that his very soul was in danger.  Yet no matter how many people he had killed, God was willing to show mercy to him.  But it was up to St. Longinus to accept it.

St. Longinus can be a great intercessor for those that commit murder for money.  This can mean this in the mafia, assassins, and especially gangs.  We have so many young people committing murder for money, not just in our country but in Mexico, in Latin America,  Asia, Russia...every country has some form of gang activity.

If you are reading this, and you have killed or murdered for money, or even if you have just hurt people for money, please pray the following prayer:


God, I know I have done wrong and I repent of every evil I have done and ask you to cleanse my heart with the blood of your son, Jesus Christ.  St. Longinus, pray for me that I may have a conversion of heart and serve and love God as you did.  Amen. 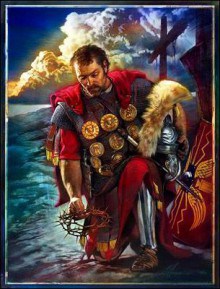 St. Longinus pray for us!