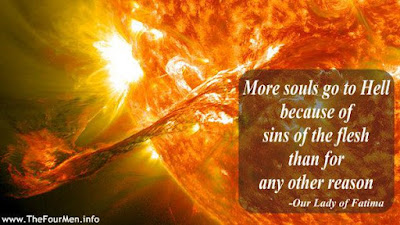 In my previous post I gave some rather grim numbers of souls that may be on the road to eternal damnation.  Scary stuff, even for me.  But there is a way to avoid it.  There is a way out.

Yes, Jesus is the one, no one can go to the Father, nor even know the Father except through Jesus.  We have to accept Jesus, confess who He is, repent, believe and be baptised.  But then we have to go out into a dangerous world full of temptations to the worsts sins that the world has ever seen.  The devil has made it so easy to sin in such a way that if you died the second after committing the sin, your soul could be eternally lost.

But Jesus knowing that we would have many temptations in this world, gave us a Lioness to shelter her children under her Mantle, His Mother.  This does in no way diminish Jesus's divinity or authority, but Jesus is allowing this grace to pass through His Mother as He Himself passed through her womb to Earth for our salvation. 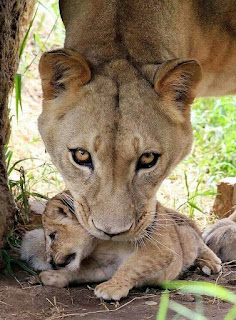 Mary cannot save us from hell, only her son Jesus can.   But Jesus can give authority to the good servant, remember?  "His master said to him, ‘Well done, my good and faithful servant. Since you were faithful in small matters, I will give you great responsibilities. Come, share your master’s joy." Did giving great responsibilities to the servant in any way diminish the Master? No.  But which one of the servants would you want to hang out with to get to know the Master? The unfaithful or the faithful one?

Can you go directly to the Master yourself? Sure, but be afraid that He may say to you, "I do not know you."  God's ways are above our ways, and trust me, when we go to our judgement we are not going to 'fist bump' Jesus as I heard in a recent song on the radio.  God is so Holy that if Moses had looked on His face when God had passed by, he would have died.

God wishes us to use the gifts He has given His Mother because doing so glorifies the Father and the Holy Spirit whom overshadowed her to bring forth the Son. 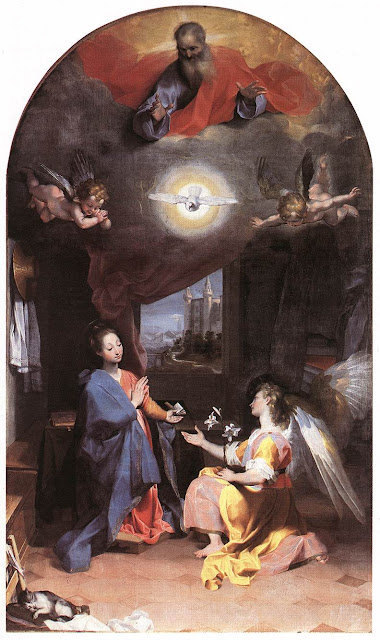 God longed for our salvation and when the moment came He sent the Archangel Gabriel to a young girl saying  "Hail full of grace, the Lord is with you, blessed are you among women."  This is the Angelic Salutation, not because they are the Angel's words, but they are God's words through a messenger.    What did the Angelic Salutation do?  It brought life to the Earth.    So just as the Holy Spirit overcame her and brought life into her womb, the Angelic Salutation always brings life to the Earth.   God is pleased whenever we pray these words in the Hail Mary, Rosary, or the Crown of Twelve Stars because we are re-presenting back to Him the moment of the Incarnation of His Son and our salvation.

This was God becoming one of us, for us.  Jesus is life.  Mary brought forth this life for us.  But Mary wasn't just meant to be a Mother one time, she was meant to have children in abundance.  Jesus would be the only physical child she would bear because she bore God in her womb, it was now Holy as long as God is Holy, which is for all eternity. 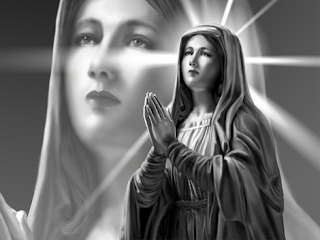 She would not have flesh children that must someday die, for she was now the Mother of all the living in Jesus.  She could not taste death from this moment on or God would be made a liar, because death was created by sin, and she had to be sinless and holy for God to come into her womb.  God cannot abode with sin, they are incompatible.  So with the Passion of her Son, Jesus would allow a grace of life to again be given through her.  The grace would be the Rosary which always brings life to the Earth.

(The Hail Mary) Just as almighty God chose the angelical salutation [Hail Mary] to bring
about the Incarnation of His Word and the Redemption of mankind [Lk 1:28, 42], in the
same way those who want to bring about moral reforms and who want people reborn in
Jesus Christ must honor me and greet me with the same salutation. I am the channel by
which God came to men, and so, next to my Son Jesus Christ, it is through me that men
must obtain grace and virtue. (Mary to Blessed Alan de la Roche, in Secret of the Rosary, 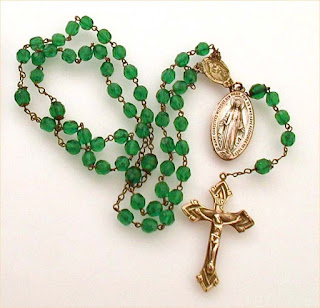 Still even with the grace of the blood of her Son and the Holy Rosary, there was much sin on the Earth and many were on their way to eternal damnation.  She is their Mother as much as she is Jesus's Mother.  She loves the children that Jesus gave her at the Cross as much as she loves the Son whom she watched suffer on it.

Do you know the pain in a Mother's heart when a child is suffering and the child won't turn to the Mother who only wants the best for her child?


Our Blessed Mother even tells us the possible condition of the soul that hates the angelic salutation:


"Know, my son, and make all others know, that it is a probable and proximate sign of
eternal damnation to have an aversion, a lukewarmness, or a negligence in saying the
angelical salutation, which has repaired the whole world."(Mary to Blessed Alan de la
Roche, in True Devotion to Mary, 157)

How could Jesus wish that His Mother be in such pain knowing how much she loves us?  She pours herself out before the throne of God, pleading that her children not be lost.  So out of His love for her, He allows the grace necessary for final salvation to pass through His Mother for those that will complete the First Five Saturdays Devotion.


"I promise to assist at the hour of death with the graces necessary for salvation
all those who, in order to make reparation to me, on the First Saturday of five successive months, go to confession, receive Holy Communion, say five decades of the Rosary, and keep me company for a quarter of an hour, meditating on the fifteen mysteries of the Rosary.”

Is this a get out of Hell-jail free card?  No.  God doesn't work that way, but God brings life, for when you do the First Five Saturdays, consoling her Immaculate Heart, you have a special place in Our Mother's Heart.  Mary was assumed into heaven without tasting death.  So when you are in her heart, you are in the heart that still beats and will never die.  In her love for us the Blessed Virgin will then go to Her Son and say to Him, "Son, look at my child who tried to console the pain in my heart that my other children give me." 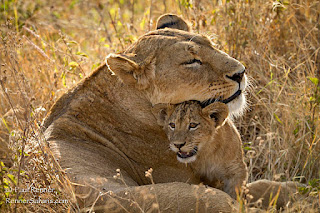 The First Five Saturdays Devotion give us the grace of final perseverance.    So when you die the devil will not be able to get to you because of the Mother sheltering you from the accuser.  Yes, you must face God in your Judgement, but do not be afraid, Mother will be there, holding your hand.

Click here for information on the First Five Saturday devotion.

The Little Number of Those Who Are Saved 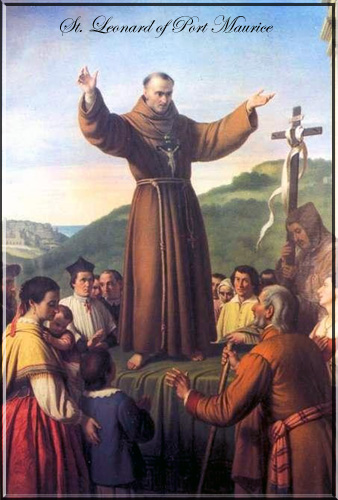 In reading this sermon by this great saint,
(which you can find here:  https://www.olrl.org/snt_docs/fewness.shtml )
at times we are given numbers of those saved either by going to Purgatory or Heaven in relation to those who had died at that moment.  Of course I had to do the numbers.

God is eternal, we are flesh and weak, God knows that.  God in His mercy has given us access to the eternal while we are still in the flesh so that we may be purified for Heaven.   God gives us a path of penance so that we may go to our judgement with the greatest Saints to defend us against the devil who will seek our eternal destruction.

USE WHAT GOD HAS GIVEN US, USE WHAT TOUCHES ETERNITY and has an everlasting ETERNAL benefit.    First we must believe and know that Jesus is God and died for us, and then we must learn about and stay close to the Church He gave to us.  God has given us the Holy Mass, Confession,  Baptism, the Most Blessed Sacrament, the Rosary, the Stations and the Anointing of the Sick. 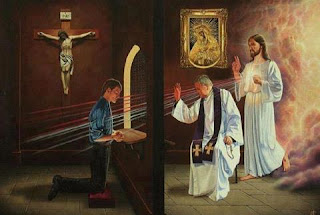 God has given us the Holy Mass which opens Heaven for us.  He gives us Holy Confession which unchains us from the devil.  We have the Most Holy Eucharist which heals and strengthens us as we fight against a decadent world.  We have the Saints to intercede for us if we will seek their prayers.  We have prayer in front of the Most Blessed Sacrament which can purify a soul by repairing not only the sin of the soul praying, but this can also heal generational evil attachments.  (Know someone who has bad 'luck'? Encourage them to seek God and pray in front of the most Blessed Sacrament.) 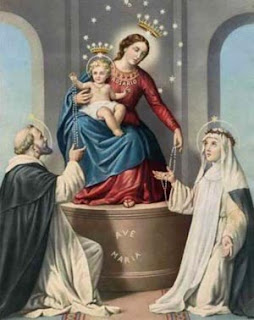 The Holy Rosary always touches eternity because it touches the Immaculate Heart of Mary and can repair many sinful tendencies.  The Holy Rosary like the Angelic Salutation exclaimed by the Archangel Gabriel always brings LIFE.  If you pray the Rosary you will either give up the sin or give up the Rosary for living in perpetual sin and praying the Rosary is incompatible. 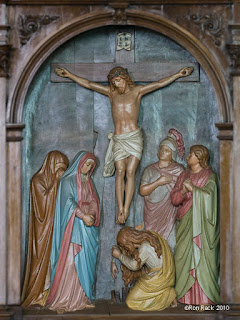 The Stations of the Cross hold a truth that God the Father will never deny.  Praying the Stations is a great way to make a Saint.

FIGHT FOR YOUR SALVATION!  God knows the heart, so we must truly change from within.  God is willing and desires you to come to Him if you would just repent of your sins, seek out the Sacraments of the Church and truly change your ways.  Don't be lost for all eternity.  Be a Saint.

Never deny anyone to receive the last Sacrament.  There are many souls in Purgatory that are so thankful that a Priest was called and they were giving the Anointing of the Sick before they passed, otherwise they would be in hell for all eternity.