I know the devils plan.

The devil has been working up to this moment for a very long time.

You see the devil has a lot of time to think and he is constantly retracing his steps to see where he went wrong and how he can overcome God next time.  This is the pride of the demon to keep trying, thinking eventually he will win.  He won't. I've read the end of the book, we win.

But don't be complacent.  When Christ comes again and it is the end of mercy, and His perfect judgement begins there will be many screams and horror as the damned realize they have no time left.  They were given EVERY opportunity to repent and for all eternity they shall suffer torment.  Yes, there is victory, but there will be horror for many.

When Christ comes many will pray and beg for death.  They will beg for death on the realization that they are eternal, that they were always in eternity and their evil thoughts and deeds where always seen by God.  They will wail and cry because the time of mercy is finished and they have wasted thousands of chances God gave them in their life to repent.  This will be a horror I cannot even begin to describe although I have seen it.  It will only be by God's grace that those that have stood on the side of the Christ will be able to stand and see the damnation of so many souls.

By their own hand they are condemned as the books of their lives are opened and they have written every evil thought and deed as they chose to 'do as thou will'.  Know that by your own words you are condemned.

They cried out to the mountains and the rocks, “Fall on us and hide us from the face of the one who sits on the throne and from the wrath of the Lamb,because the great day of their wrath has come and who can withstand it? Revelation 6:16

But I will tell you the truth.  Now, right now is the time the devil has planned for.  Right now is when it seems to all be coming together for him.

You see the devil knows that what constrains him is the Catholic Church.  The Holy Mass, the sacraments and the prayers of the faithful restrain him in many ways and he has no defense against this.  He has sent many evil Antichrists before that have killed millions (Napoleon, Mao Zedong, Stalin, Hitler) but they didn't wage the full horror the devil would have loved seen come to the world.  Let's face it, each of his Antichrists where contained to an area or the world and could not go full global with their horror.

Not so with the Antichrist to come.

Let me give you some data to back up my claim: 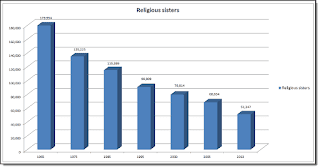 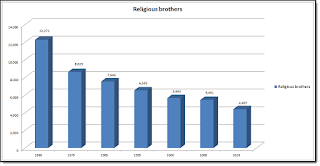 This is his plan.  Decimate those that can do him the most damage (The Catholic Church) which he has no defense against.  The devil cannot come against the Holy Mass or the Sacraments, he can only lessen the number of Masses being said and the number of sacraments being administered.  In this way he hopes to get the world to such an atheistic state that the scene will be ripe for his next Antichrist.

This is where he is wrong.  Yes, faith is under attack and many are falling away from the true battlefield which is the Holy Mass, but even if there is only one Holy Mass celebrated on the earth, that one Holy Mass changes the whole earth.

Yes my friends the next Antichrist is coming and he will be worse than anything ever seen on the earth.  The Holy Catholic Church will be forced into exile and persecuted as it was in the beginning.  But the Holy Priests and faithful, the true remnant, will keep the Holy Mass alive on the earth and the gates of Hell will NOT prevail against it.

“He shall speak pompous words against the Most High, shall persecute the saints of the Most High..", Daniel 7:25

As in the time of the holocaust there will be many that we think of as friends that will abandon us when the greatest time of persecution comes.  The Holy Mother Church will be very much alone in her struggle to keep the devil at bay.  Many of our protestant brethren will relish in our diminishment and do so even now.  They will join any evil force that attempts to bring down Holy Mother Church because she is a constant reminder of their true origins and they will be fooled that to do her harm is to do a good to the world.

Get ready kids, this is coming.

The prayers of the religious have restrained the evil one for so many centuries, but now as the religious orders are dwindling, and as those religious that are left are falling way to the ways of the world, the demon is about to be fully loosed upon the world.

The remedy is simple.  We, the laity must step up and take the place of our fallen religious.

We have an opportunity at every Holy Mass to go to the Throne of God and plead for mercy for those that will face the last judgement even if we do not see it ourselves.

The demon is a snake, so stay close to your Mother. Pray the Holy Rosary. 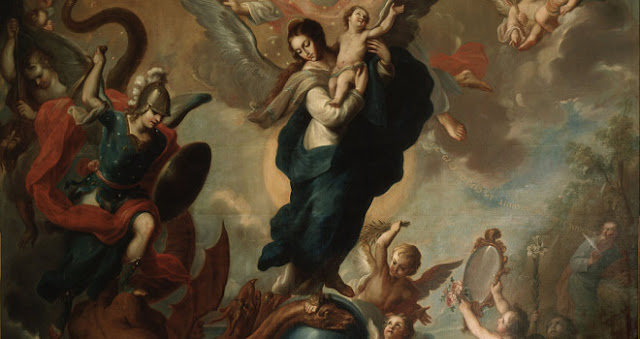 My Mom isn't afraid of snakes.

So go to Holy Mass, stay close to the Sacraments and the Church, pray in front of the Holy Eucharist and pray the Rosary.

If you are a fallen away Catholic, come home.  You are most welcome on the battlefield.  All it takes is confession

Trust me, when these times befall us, you do not want to be with the masses.  We will be the underdog and the only place of safety.  Come home. 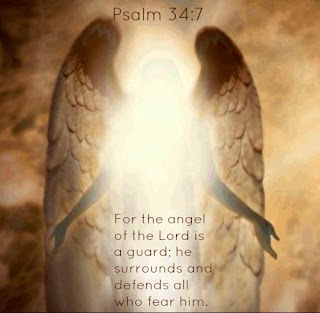 There are angels constantly around us, luckily we cannot see the worst of them.  If we could see and perceive the bad ones we would be driven mad because our fleshly brain could not handle it.  God in His mercy hides many things from us that would do us harm.  But also because of our fallen, fleshly nature we cannot really perceive many of the heavenly things (like the good angels) unless God allows it.

Sometimes He lets me perceive the presence of an angel, or many angels.  This has happened on more than one occasion.

Recently I went into St. Bertrand to go to Holy Mass and I always come in the handicap entrance. As I dipped my hand in the Holy Water Font God allowed me to perceive (not see) the angel that was guarding that Holy Water font. I stopped in my tracks.  I was aware of him, and I could perceive that he was aware of me and as my hand hovered over the holy water font, he was looking at me.

If God allows you to perceive something, He also allows you to have some knowledge about it.  I knew this angel's job was to guard this Holy Water font for all time.  I knew it held a spear of light which it held at its side ready for battle if needed.

Now understand, I am a Mathematician.  I analyze everything.  So my first thought is, "Why did God allow this?"  God wastes nothing, and if He allows you to perceive something it is either for your good or for the good of another.

Immediately my mind was racing, "Ok, what do I know and how do I use this."  I know that the Angels (all of them) always face the throne of God, no matter where there assignment is.  So whether an angel is assigned to protect you, a church, or a Holy Water font, they always have one face toward the throne of God.

So before I dipped my hand into the font I prayed a prayer under my breath so I knew the angel would hear it.

"Angel of the Holy Water Font, pray for me."

Then God in his grace allowed me to perceive the angels answer.


The angel nodded in assent to my request. 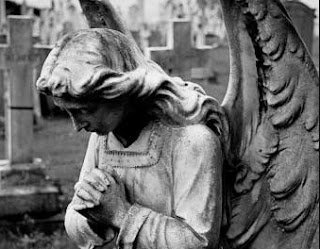 Angels are constantly around us, but when God allows you to perceive one (or many), you have just won the proverbial heavenly jackpot. 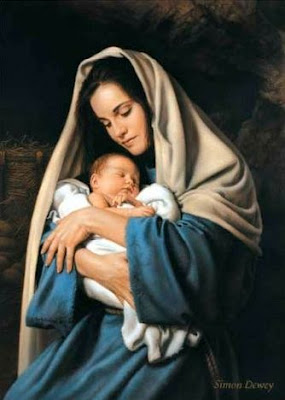 Sometimes deep in prayer I feel that I get a little glimpse into the life of the Blessed Virgin and her Son, our Lord, Jesus Christ.

I saw a beautiful Mother, holding her son, and she was singing a beautiful little lullaby to Him.   Mary would sing this Lullaby to Him whenever he was a child to soothe Him.  Mamma's arms and that sweet Lullaby always brought Him comforted and peace in his childhood. 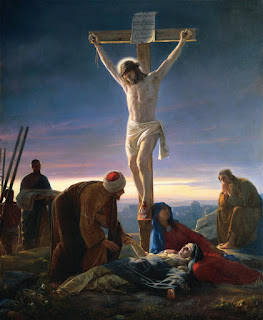 Later I was shown the most Blessed Mother on Calvary at the foot of the cross.  Jesus has been crucified and was suffering greatly. 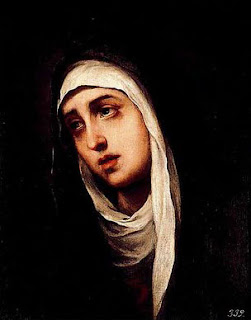 No one heard it.  She sang it softly, just her lips were moving.  But Jesus had seen that movement of her lips many times.  It was just for Him.

She was quietly singing the lullaby to Him. 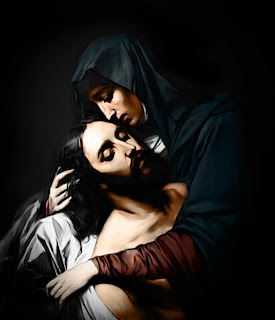